Parkinson’s disease is the nightmare of many people. What can you tell us about it?

Parkinson’s disease is a chronic neurologic disease which occurs due to insufficiency of the “dopamine” substance in the brain. The disease shows itself with age when the cells which release dopamine in the brain decrease in size or get damaged. It causes movement disorders and involuntary movements. In this disease we observe tremor in hands and feet, slowing of movements, reduced mimics in the face, hardness in the muscles and walking bent over and with small steps.

Although Parkinson is a chronic and progressive disease, we shouldn’t be afraid of it that much. At first, it’s possible to live an average life with this disease when medical treatment is received. We can provide average living standards by surgical operations, in case medical treatments lose their effect.

How do they diagnose Parkinson’s disease and what are the clinical signs of it?

Parkinson’s disease is diagnosed by clinical findings. The indications such as tremor in hands which is usually more prominent in one half of the body, slowing in movements, unrelaxed arms and walking with arms stuck to the body, dullness in eyes and loss of mimics – accompanied by a situation called “mask-like face”, walking bent over and with small steps should be considered as the early stage of the disease, especially for the elders. The patients should consult to a neurology specialist.

How should Parkinson disease be treated in your opinion? Can you inform us about Deep Brain Stimulation (DBS)?

Deep brain stimulation, which is called “neuromodulation” in medical literature, is a treatment method in which we place thin electrodes inside the brain and give electric current to the issued zones and expect to improve the findings of the disease. By this method, we can inhibit or stimulate the activities of the cells in the target zone. We can control and program the given current. This makes the method completely recyclable, controllable and adjustable treatment.

What are the benefits of Deep Brain Stimulation? 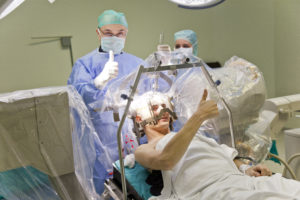 We can define those benefits as “set the clock of the disease back”. We can return the patient who is suffering for around 10 years to the first or second year of the disease when we perform this operation. This means returning to life for those patients who can’t tie shoes, hold a fork, button up the jacket and who are detached from life and can’t do their own job and can’t live without somebody else’s help. So, most of them can do their job again and live on their own.

The possible benefits of the treatment are parallel to those of the high-dose medical treatment without the side effects.

What do the patients experience in the pre and post-operational period? When they get adapted to the normal life?

We perform these operations while the patient is awake and talking in order to help out each other. Under local anesthesia on the surgical table, we find the targets without any mistake with a method called “Microelectrode Record and Stimulation Technique” via electrodes which we send one from each hole that were opened by us in advance.

By this technique, we could be able to listen to single cell’s electrical activitiy in the brain which are responsible for the disease; and we can stimulate them as well in an awake surgery. After defining the exact location of these cells, we place two thin neurostimulator electrodes bilaterally.

Then, we connect them with subcutaneously placed extension leads to a neurostimulator device which placed under the skin in upper-chest area just like we do it in cardiac pace makers. Of course, the entire system is located inside the brain and under the skin.

Nothing is seen from the outside. The patients don’t feel pain or ache except for the several anesthetics syringes. They can sing or tell jokes during the operation.

After several days from the operation, patients’ neurostimulator devices get calibrated in the polyclinic control examinations on foot. The most suitable settings can be reached around 2-3 weeks of control visits. Then, the patients come for control visits 3-4 times in a year (3-4 months intervals) and their neurostimulators and medication protocols are checked. So, they can live on.

What changes occur in the life of a patient who underwent Deep Brain Stimulation procedure? What should the be patients aware of?

The patients who underwent the procedure can live on and do any sports activity. Of course, they have to evade impacts. They should not do traumatic sports, martial arts, or hit the ball with their head. Apart from these, the patients can swim, play tennis, do any activity and live their life normally.

The patients carry some kind of metallic implant and electronic device, so they trigger alarms in the airports and places with strong security systems. We provide a certificate that indicates the patient carries a device. Thus, the patient passes through the manual security check, not the electronic.

What are the risks of Deep Brain Stimulation procedures?

Like in every surgical intervention, these operations also have minimal risks. During the surgery, we access the patient’s brain through small holes on the head and insert and advance tiny electrodes in the brain. However, these risks get lowered down to nearly nothing by Microelectrode Record and Stimulation Technique, which makes the results highly satisfactory.

We can say that there are 1% infection risk and 1% cerebral hemorrhage risk, when the operation is done by experienced physicians.

Thank God I’ve never encountered these kinds of serious complications in more than thosand operations for movement disorders and in more than 650 deep brain stimulation procedures which I performed.

Resume of the Surgeon

I was born in Ankara in 1960. I graduated from Hacettepe University Faculty of Medicine as a medical doctor. I became Neurosurgery Specialist in Marmara University, in 1994. In the same year, I finished the Neurophysiology graduate program. I attended the courses of European Society of Neurological Surgery, and in 1994, received my diploma. I completed further education on functional neurosurgery in Toronto Western and Johns Hopkins Hospitals between the years of 1995-1997.

Thanks to the experimental studies I have done, I achieved the awards of Brain Research Society (1995) and Eczacıbaşı Award of Medical Encouragement (1999). For the study “Human thalamic nucleus mediating taste and multiple other sensations related to ingestive behavior”, I was granted the International Elekta Award on functional neurosurgery in 1997 which is given to a neurosurgery specialist once every 4 years.

I returned to Turkey in 1997 and started to perform neurosurgery operations with “Microelectrode and Record and Stimulation Technique” for the surgical treatment of movement disorders. I performed this operation for the first time in our country and I still do the same job.